Call it a development ripple effect from the Buffalo Niagara Medical Campus, Main Street and the East Side.

Cedarland Development Group, which just completed a large apartment project near the medical campus, is moving ahead with another apartment-anchored building.

Cedarland recently opened The Grid Apartments, a $25 million, 217-unit apartment building at 1155 Main St. Next up is a smaller apartment building at the corner of Michigan Avenue and Best Street. The three-story, 27-unit building, is proposed on a series of vacant lots near City Honors High School, two blocks north of the medical campus.

Kevin Dagher, Cedarland vice president, said the Michigan-Best Apartments will cost $4 million to $5 million to build. Construction is expected to start this spring and take a year, he said.

The Buffalo Common Council meets Nov. 24 and is expected to name Cedarland the designated developer for the four parcels needed to build the apartments.

“I know this will be impactful, in a positive way, for that corner and neighborhood,” Dagher said.

The project is the latest in a series of developments that bridge the neighborhood between Main Street, the medical campus and the East Side.

SAA-EVI is beginning work on a $50 million residential-anchored project in the first phase of Pilgrim Village
Ellicott Development is working on projects in and around Our Lady of Lourdes Church.
Dagher said the Michigan-Best Apartments will have a mix one-bedroom and two-bedroom units. Eco-Logic Studios has been retained to design the apartments.

“The design really enhances the landscape,” he said.

Dagher said the decision to build a second apartment building in that area was based on demand. The Grid has already leased 115 of its apartments, many to people moving into Buffalo because of the medical campus or other businesses. 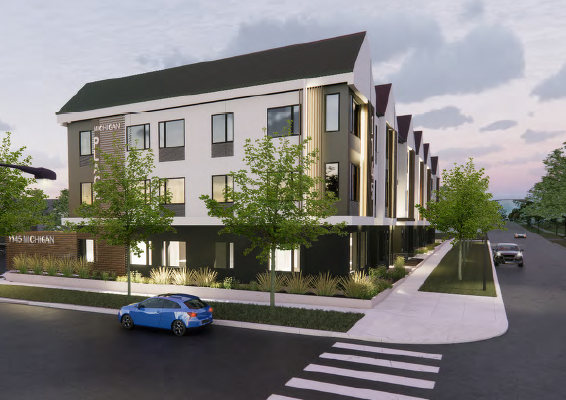